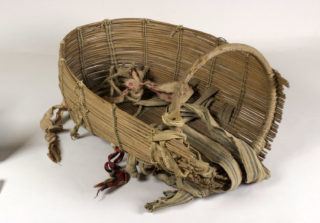 Cradle from Alexander Valley. Cat. No. 1-1

The ethnographic collections arise from three main sources. The first, the California Survey (ca. 1899–1908), represents the most extensive period of systematic collecting of California ethnology in the Museum’s history. Alfred Kroeber was assisted by faculty and students such as Pliny Goddard, Thomas T. Waterman, and Samuel A. Barrett. In most cases, the cultural context of each object was documented in notes, maps, photographs, film, and sound recordings. This survey is an example of what we now call salvage ethnography, which attempted to preserve Native objects and knowledge in museums because white scholars perceived those cultures to be destined for extinction. The population of Native Californians declined precipitously with Spanish, Mexican, Russian, and later American colonization, particularly after statehood due to campaigns of genocide waged by settler colonists. It was in this historical context that the Museum initiated its study of California tribes primarily in non-urban areas of northern, eastern, and southern California. Recently Native Californians from these and other tribes have used California Survey materials for their own cultural revitalization projects.

A second, much smaller collection was produced by Ishi, a Yahi Indian, during his life at the Museum between 1911 and 1916.

A third collection originated from a smaller second California survey (ca. 1925–1935), and a cluster of private collections, composed mostly of baskets made as tourist items and sold on the market. This includes the collections of Edwin L. McLeod (1915) and Grace Blair du Pue (1944).

The Museum is especially well known for its collection of more than 8,000 California baskets. One of the largest collections in the world, the collection is especially comprehensive and well-documented. Particularly significant collections come from the Klamath River region (Yurok, Karuk, and Hupa) and the Pomo, as well as an early signed presentation basket by Ventureño Chumash weaver Maria Marta Zaputimeu, ca. 1825. The University’s strength in California archaeology began before the Museum’s founding. In 1899, Phoebe Hearst, who would later found the Museum, sent Philip M. Jones to excavate in the Channel Islands and the Central Valley (1899–1902). During the following years, the San Francisco Bay shellmounds were studied, first by Max Uhle (1902), and then Nels Nelson (1906–1911), Llewellyn L. Loud (1911-1913) and Edward Gifford and W. Egbert Schenck (1924–1925). In 1942, the Sacramento Junior College transferred Jeremiah B. Lillard’s collection consisting of his excavations in the Sacramento-San Joaquin River Delta region of Central California.

The Museum’s collection of California archaeology was enlarged by Berkeley professor Robert F. Heizer and his students during the 1940s and 1950s. Working in what we now call a “salvage” archaeology model to quickly excavate before mid-twentieth century dams and road projects destroyed archaeological sites, they formulated a complete regional and temporal reconstruction of the region’s earliest inhabitants. The University of California Archaeological Survey collection, numbering 178,000 catalog entries, represents about two-thirds of the California collection.

The end of the California Survey and the rise of cultural resource management archaeology in the 1970s marked the end of the Museum’s active involvement in field archaeology and acquisition of archaeological materials. A few collections undertaken by archaeologists not affiliated with the Museum have been accessioned in recent years, but these undergo rigorous assessment and scrutiny concerning sensitive cultural remains before they are brought into the Museum. One example is the 13,000 object collection from the San Francisco historic waterfront that were salvaged when the city expanded its sewer lines in 1978. The collection likely represents the most comprehensive “type collection” of historic artifacts from nineteenth century San Francisco. Another example of a recent accession is a collection from the final 1999 excavation of the Emeryville Shellmound, one of the largest and oldest archaeological sites in the San Francisco Bay Area. This accession makes the Museum the sole repository of all the artifacts excavated from this important site for over a century.

The archaeological collection from Nevada includes more than 40,000 catalog records totaling more than 200,000 individual objects. Alfred Kroeber showed an early interest in the region, which resulted in the exploration of important prehistoric sites such as Lovelock Cave and the Humboldt Lake Basin. In the 1950s and 1960s, Heizer and his students followed Llewellyn L. Loud’s steps and expanded the Museum’s collections to encompass the entire chronological span of the state, from very ancient caves and sites like the Leonard Rockshelter in Churchill County, to contemporary native villages used until the beginning of the 20th century in Lander County.

This area is largely represented by a collection made by the Alaska Commercial Company in the late nineteenth century. In 1897, the University of California was given 2,400 artifacts collected from all three culture areas represented in Alaska: the Eskimo of the Arctic, the Athapaskan of the Subarctic, and the Tlingit and Haida of the Northwest Coast. The company traders were quite eclectic in their collecting strategy, acquiring trade novelties as well as more traditional items. This accession is complemented by the related collection amassed by Charles L. Hall, an Alaska Commercial Company employee. Faculty curator Nelson Graburn also donated his well-documented collection of Canadian Inuit soapstone sculpture.

While relatively small, the Northwest Coast collection includes some important Tlingit and Haida objects. Among them are a monumental Haida totem pole and a pair of Kwakwaka’wakw house posts collected by Charles F. Newcombe; Haida argillite sculpture, including a decorative plate attributed to famed Haida carver Charles Edenshaw; and Tlingit artifacts from early geographer George Davidson.

The Midwest and Southwest United States

The Museum has important holdings from the Southwest United States, with Phoebe Hearst’s own donations, especially Pueblo and Navajo textiles, the George Pepper Pueblo pottery collection (1903), Kroeber’s well-documented collection from Zuni (1918), and representative 1930s collections from geology professor Norman E. A. Hinds. From the Plains, there are some important early collections such as the Osage and Omaha objects collected by Native anthropologist Francis LaFlesche and Apache and Kiowa objects collected by Army General Hugh L. Scott. Additional objects from this region were collected during Samuel Barrett’s filming of the Blackfoot and Sioux Tribes in the 1960s.

Mexico was a personal collecting interest of both Phoebe Hearst and her friend, the anthropologist Zelia Nuttall. Beginning with their efforts, the Hearst Museum possesses the largest museum collection of the finely-woven Saltillo serape blankets in the world. Nuttall also donated some important lacquered items, carved gourds, and textiles. These objects were studied by Katherine D. Jenkins, a student in Berkeley’s Decorative Art Department. Jenkins went on to amass her own extensive collection of Mexican folk art, especially lacquer, during the 1960s and 1970s. During the late 1950s and early 1960s, Anthropology professor George M. Foster collected pottery from his principal fieldwork site of Tzintzuntzan, Michoacan. He made a comprehensive representation of Mexican folk art, along with pottery and other crafts from Jalisco contributed by his graduate students. The Museum’s strength in Mexican folk art has recently been expanded upon by the acquisition of two large collections, by Steve Vietti and John Paul, with more than 1,400 objects, mostly ceramic figurines representing many aspects of life and beliefs of contemporary rural communities.

The Museum also has a significant North American collection from non-Native American peoples. The collection that the Museum inherited from Berkeley’s former Decorative Art & Design Department is especially strong in textiles, and also contains media. The collection includes 19th-century quilts and coverlets and part of the studio collection of textile designer Dorothy Liebes (ca. 1950–1960s). Highlights from the relatively small but important collection of American folk art include carving and textiles from African-Americans and New Mexican Hispanics. 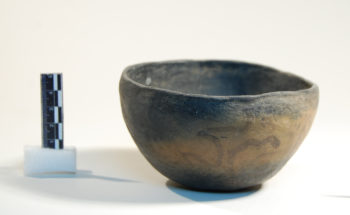 The Arizona Collection by Joseph Peterson

On May 19, 1904, Joseph Peterson started to dig a trench through the West Berkeley mound, one of the oldest and largest prehistoric shell mounds in Central California. Pa…