Since its founding in 1901, the Hearst Museum has gathered a collection of over 8,000 California Indian baskets: one of the largest, most comprehensive, and best-documented in the world.

Although there are baskets from almost every Californian tribe, particular regional strengths are from the Klamath River area (Yurok, Karuk, and Hupa) in the northwestern part of the state and the Pomo Tribes of the North-Central region. Southern collections are well-represented for the Sierra Miwok, Yokuts, and Cahuilla Tribes. 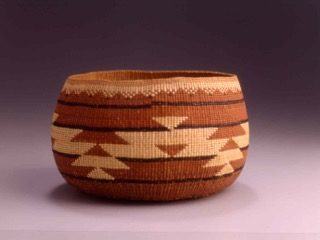 Samuel A. Barrett earned the first doctorate in anthropology from the University of California for his dissertation on Pomo Indian Basketry (1908). Not only did he collect finished baskets, but also the raw materials from which they were made, along with information concerning makers, locations, materials, and techniques. A generation later, another of Alfred Kroeber’s doctoral students wrote an important dissertation on California basketry. Lila M. O’Neale interviewed the community of Klamath River weavers about their aesthetic preferences for Yurok-Karok Basket Weavers (1932).

In addition to baskets gathered by campus anthropologists, the museum has several important collections donated by private individuals, composed mostly of baskets made for sale to tourists and collectors. These include large and fine collections from Edwin L. McLeod (1915) and Grace Blair dePue (1944). 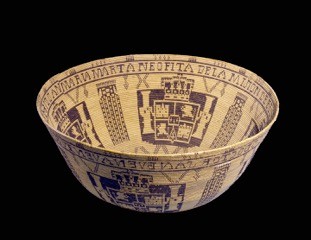 The Museum also cares for a rare, early “signed” basket made by Ventureño Chumash weaver Maria Marta Zaputimeu. She wove it around 1825 for presentation to a Mexican dignitary visiting the San Buenaventura Mission.

Baskets from the Museum’s collection are regularly loaned to other museums for exhibition. They have been the subject of study by leading basket scholars. Perhaps the most avid researchers in the collection, however, are the many Native American weavers seeking inspiration for the continued practice and revival of their basketry traditions.