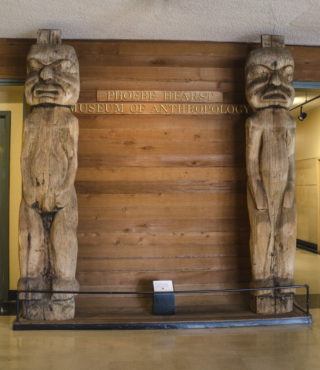 Visitors to the Anthropology and Art Practice Building will be greeted by a pair of Northwest Coast house posts, two of the best known objects in the Hearst Museum’s collections (Catalog nos.: 2-9221 and 2-9222). These cedar posts originally formed part of the frame of a large family house, which stood in the Kwakwaka’wakw village of Wyclese. Situated in Smith Sound, on the central coast of British Columbia, this was the territory of the Gwa’sala, the most northerly of Kwakwala-speakers. 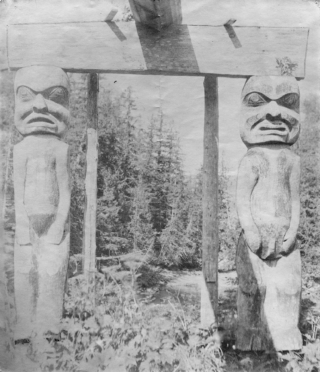 Originally, the posts helped support the central roof-beam for a house measuring about 60 feet long and 40 feet wide. They were connected at the top by a wide plank, which supported a long ridge pole running the full length of the house. The roof and walls were composed of red cedar planks. Such large houses were occupied during the winter months—a time for ceremonies—alternating with smaller, temporary camps used when gathering food during the summer.

These posts depict a pair of mythical male and female ancestors of the house-owner. Each house post, about 10.5 feet tall, was carved out of a single log of red cedar, with the back flattened out. The poles show the light, decorative adzing often found on monumental Northwest Coast carving. Faintly visible on the faces of each figure are traces of the original black, red, and white pigments. 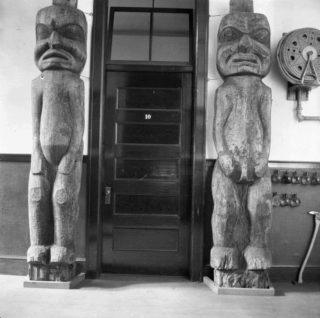 The house posts in the Museum’s San Francisco location

These posts were purchased from the house owner in 1906 by Charles F. Newcombe, a prominent collector of Northwest Coast art. When Newcombe bought them, the village of eight houses was abandoned, as the Gwa’sala had recently relocated to a new village nearby. Originally on display in the Museum’s first home in San Francisco, in 1959 the posts were installed at the entrance to the new gallery in the Anthropology and Art Practice Building, before being moved to their current position in 1980.