The Hearst Museum has one of the largest and most important art collections held by an anthropology museum, with approximately 800 items. Formed under the initial patronage of Phoebe Hearst, it is second only to the Harvard Peabody Museum’s collection. Although Mrs. Hearst’s interests were partly aesthetic, the collection has since served as documentation of Native peoples, objects, and sites.

Most of the subjects are Native Americans, principally from Southwestern, Plains, and Alaskan groups. Most of the artists are also American, including noted painters such as Carl Oscar Borg, Emily Carr, Henry Wood Elliott, Amédée Joullin, Caroline Mytinger, Henry Raschen, Joseph Henry Sharp, and Jules Tavernier. 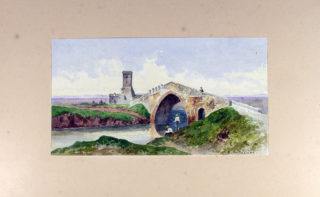 Media include oil on canvas, as well as many kinds of works on paper: watercolor and gouache; drawings in pencil, charcoal, ink, and crayon; and prints in the form of lithographs, etchings, silk-screens, and engravings.

The Museum also has an extensive collection of paintings made for sale by a wide range of Native artists; these have been largely cataloged under their appropriate regional categories. Included are Pueblo watercolors and Northwest Coast Indian silk-screen prints from North America, European miniatures, Russian religious icons, and oil paintings from Mexico, Guatemala, Ecuador, Gabon, Indonesia, and the Philippines. There is also a well-documented collection of traditional paintings from India (principally Rajasthan), about 120 Australian Aboriginal bark paintings (as well as a large set of silk-screen reproductions), and a small but important set of Roman-period mummy portraits from the Fayuum, Egypt.