Throughout her life, Phoebe Hearst was an active and generous patron of the arts, and she donated relevant paintings and photographs to the anthropology museum that she founded. Accessioning them as documentary objects in their own right, the museum displayed most of these paintings in its original exhibitions. 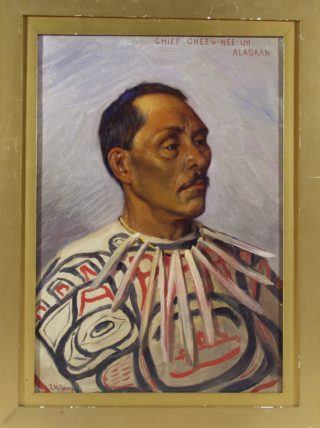 Phoebe Hearst was critical to the career of Joseph Henry Sharp (1859–1953), one of the foremost painters of the American Indian and one of the founders of the Taos School. She first learned about his work from a display at the Pan-American Exposition, held in Buffalo in 1901. Due to the glowing reports of friends, Mrs. Hearst bought all of Sharp’s paintings in the show. She donated seventy-nine canvases to the Museum and contracted with Sharp to purchase fifteen paintings a year for five years. Although she later released him from this obligation, she continued his payments. In the end, she bought eighteen more of his pictures for the university, mostly of Crow and other Plains Indians tribes. Images and information on each painting can be viewed in the Museum’s Collections Portal here. 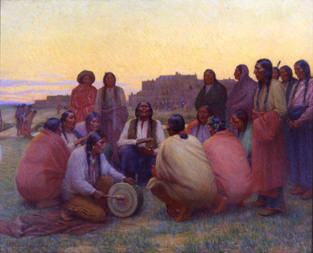 The most ambitious of the Sharp paintings donated by Phoebe Hearst was The Evening Chant (1900). Here the artist paints a romantic and nostalgic scene, with the twilight evoking the passing of the old ways. The work was evidently a favorite of Mrs. Hearst, who hung it over her desk in the Examiner Building in San Francisco. Sharp always regarded Phoebe Hearst with affection, as her largesse had allowed him to give up teaching and devote himself exclusively to painting.

Much of Sharp’s work is characterized by a desire for factual recording. He often worked from photographs and had his own collection of artifacts. Recognizing this bent, his colleagues referred to him as “the anthropologist.” Most of the Hearst collection consists of portraits of Plains and Southwestern Natives American groups.