The Phoebe A. Hearst Museum is pleased to announce the appointment of Dr. Caroline Jean Fernald to the position of Executive Director. She began her position on September 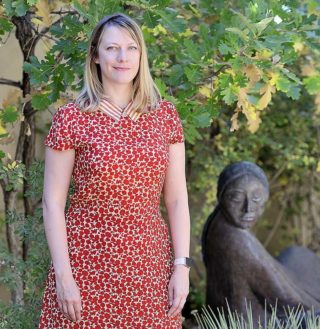 Dr. Fernald previously served as the Executive Director of the Millicent Rogers Museum in Taos, New Mexico, and  worked in collections management at the E. Irving Couse and Joseph Henry Sharp Historic Site, also in Taos. She has taught courses on Native American, Mesoamerican, and South American art history at the University of Oklahoma where she received her doctorate in Native American Art History.

Fernald joins the Hearst Museum with a deep experience in museum leadership. As director of the Millicent Rogers Museum, she led the institution through its successful reaccreditation by the American Alliance of Museums, grew its permanent collection, and more than doubled income from major gifts and grants.

As Executive Director, Caroline will lead the Hearst Museum’s mission to be a place where cultures connect with each other in uncommon ways. She will manage the Museum’s day-to-day operations as well as oversee the work of the exhibits, programs, and education divisions. Caroline will lead the Museum’s fundraising efforts and work closely with the Hearst Museum’s Advisory Board. She will also strengthen relationships with the many descendent stakeholder communities the Museum serves in the Bay Area and throughout California. This includes working with the Museum’s Native American Advisory Council, an 11-member body that advises the Hearst on a range of cultural issues.

Dr. Benjamin Porter, the Hearst Museum’s Director since 2015, will roll up to the new position of Hearst Museum Faculty Director. In his new position, Porter will coordinate research and develop new student discovery experiences in the collections. Porter will also lead collections care initiatives and coordinate projects related to the Native American Graves Protection and Repatriation Act (NAGPRA) and related cultural policy laws.

Porter, who led the Executive Director search committee, stated that “the committee was unanimous in its decision to offer this important position to Dr. Fernald. Her recent successes in museum leadership and her passion for cultural institutions made her stand out in this competitive search.” Associate Vice Chancellor for Research Linda Rugg offered that “Caroline joins the Berkeley community at an important moment when the campus is taking significant steps to improve its relationships with Native American communities. Caroline’s work here will be deeply valued.”

Please join us in welcoming Caroline to campus!