The Australia and Pacific Oceania Collection contains a  diverse representation of materials from across the region. Phoebe Hearst contributed a number of fine pieces, such as finely carved wooden bowls from Hawaii and a ceremonial headpiece from New Ireland. In the late 1920s, Berkeley graduate W. Lloyd Warner returned with an early Australian collection. Between 1928 and 1930 the Museum obtained over 100 Maori objects on exchange from the Otago University Museum in New Zealand.

In 1965, the museum purchased a Trobriand Islands collection from the widow of the renowned anthropologist Bronislaw Malinowski. At 1,519 pieces, it is the largest of the three made by the pioneering Polish-British anthropologist during his innovative fieldwork from 1914 to 1920. From the Sepik River region of Papua New Guinea, there are several hundred brilliantly painted ancestor figures. From the Highlands of Irian Jaya, there are collections from the Grand Valley Dani and a well-documented one from the Jalémo, gathered as part of field research by graduate student Klaus-Friedrich Koch in 1965. 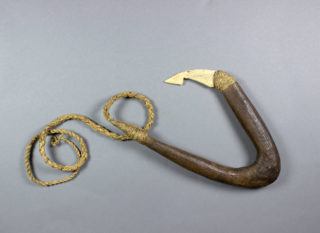 Graduate research in the Pacific continued during the 1970s and 1980s: Nancy M. Williams in Australia (Arnhem Land) in 1970, Karen Nero in Micronesia (Caroline Islands, Yap) in 1978, and Maria Lepowsky in the Trobriands area in 1979. In addition to a large set of Aboriginal bark paintings, there is also a large collection of tapa cloth.

The Hearst Museum’s Australia and Pacific Oceania Collection also contains archaeological materials, including those that Edward W. Gifford excavated during his three pioneering expeditions between 1947-1956. Gifford’s careful excavations at Viti Levu, Fiji, New Caledonia, and Yap, Micronesia reinvigorated Pacific prehistory. His work at Lapita at Koné, among other places, revealed the earliest human societies to populate the Pacific Islands. The Gifford Collections from Oceania amount to more than 32,000 catalog records.