Between 1960 and 1965, Berkeley’s American Indian Film Project documented the craft traditions of Native American societies. Today, the Museum cares for the project’s large film, audio, and image archive and is now making this content available to new audiences.

Sponsored by UC Berkeley’s Anthropology Department, the American Indian Film Project (or, AIFP) was directed by Samuel A. Barrett (1879–1965). The first person to earn a doctorate in anthropology from the University of California, in 1908, Barrett went on to a career at the Milwaukee Public Museum. In the late 1940s he retired to Berkeley, where he continued his studies on Native California Tribes.

As a life-long photographer, Barrett was eager to use film to document the vibrant Native cultures that he found around him. Under a program for developing undergraduate courses, the National Science Foundation funded the AIFP from August 1960 through 1965. The project had two major goals: to produce film footage that could be used for research, and the production of a series of teaching films that could be used in classrooms. A third goal was the training of students who would use film in anthropology. Outtakes of Barrett and his Berkeley students experimenting with his camera can be viewed here, including a rare cameo of Alfred Kroeber shortly before his death. 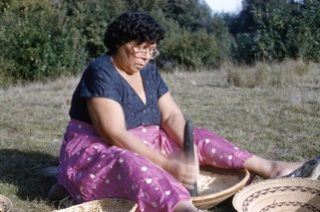 In all, the AIFP produced fifteen films on western North America, released between 1961 and 1964. Eight of the films were devoted to the Pomo Tribes, Barrett’s main interest: three films focused on basketry, two on acorns, two on ceremonial dances, and one on games. There were another three Californian films: Nisenan buckeyes, Yurok sinew-backed bows, and Tolowa obsidian-point making. Two films were devoted to the Northwest Coast: on totems poles and Kwakwaka’wakw bent-wood boxes. And there was one film each for the Great Basin (on Paiute pine nuts) and the Plains (on Sioux calumet pipes). 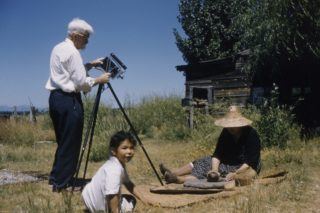 With Barrett’s death in 1965, the work came to an end. The project produced one of the largest archives of Native American film: 362,569 feet of original and work print films, and 139,200 feet of sound tape, representing twenty Native American groups. These were accessioned into the collections of the Hearst Museum.

With the support from a generous gift from the William Randolph Hearst Foundations, the Museum is now digitizing these films and making them available to a new generation of viewers, including the Native Californian tribes featured in these films. The first video, “Pomo Tule Balsa: Making an Aboriginal Boat” can be viewed here.