In February 1972, Professor J. Desmond Clark and his student, Andrew Smith, were visiting the Republic of Mali where Smith had started the excavation of some prehistoric villages and workshops in the Tilemsi Valley. The results of those excavations were to be included in Smith’s 1974 doctoral dissertation. During that winter they worked at the prehistoric site at Lagraich and collected this bead-making set. It includes 47 objects from a workshop where agate was worked into small circular beads that were then polished and perforated. In addition to the beads, Clark and Smith collected the artisan’s tools: drills, scrapers, burins and cores all made with high quality flint. 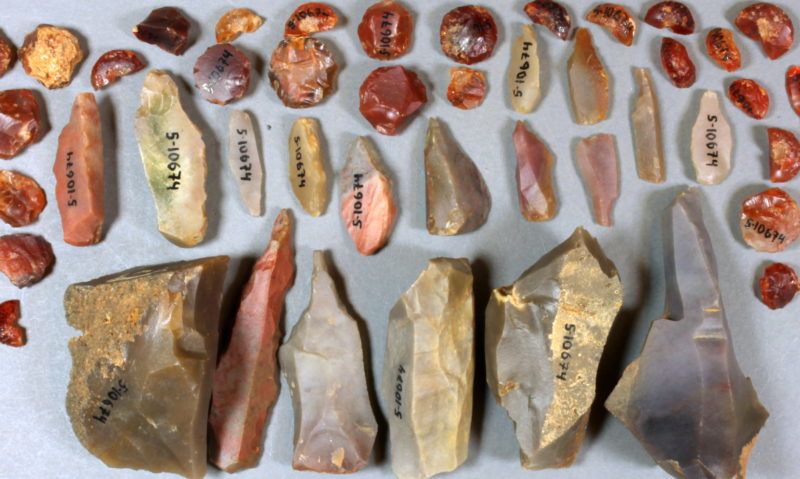 The Tilemsi Valley and its archaeological record are significant because it is one of the earliest places in sub-Saharan West Africa where a pastoral economy is recorded. In Africa, domestic cattle are dated to about 8000 BP in southern Egypt but domesticated millet and grains are dated much later. How pastoralism and farming spread across Africa appear to be a more complex process than in Europe and the Tilemsi Valley is a key place for our understanding of it.

Lagraich is located about 20 miles east of Karkarinchinkat, another prehistoric village dated at 2200-1360 B.C. A larger excavation allowed the collection of thousands of diverse artifacts; pots, stone tools, seeds, figurines, faunal remains, soil samples, pendants, charcoals, awls, shells and beads. In this collection it is noticeable that semi-precious stones were not the only medium for crafting items of personal adornment and, likely, trade. Beads, pendants and necklaces were also made with shells, bones and clay. According to some authors, characteristic pottery decoration at Karkarinchinkat was determined to be a type on its own. In 2006, a team from Cambridge University undertook excavations at the site of Karkarinchinkat. Similarly to Smith, they came across a few human burials, analyzed them and published their results in 2008. They found the earliest evidence of teeth filing for aesthetic purposes, in Africa and possibly worldwide. More specifically, the people who lived at Karkarinchinkat in the third millennium B.C. intentionally modified their canines and incisors to a pointed shape. This type of dental modification is not documented in historic or modern groups in the region but is present in the south (Angola and South African groups).

The material culture and biological record indicate that the Tilemsi Valley must have been an  interesting place to travel to 4000 years ago. The nature of the sites and the objects collected indicate a high degree of sedentism and domestication was a major component of the local economy, supplemented by limited hunting and the exploitation of river resources. The landscape was much greener than today. Possibly as a result of this situation, these tribes developed specific crafts and a sense of aesthetic that was reflected in items for personal adornment such as beads and pendants, high quality stone tools and blanks, a characteristic ceramic style and most likely textiles and basketry. People who traveled to the valley in the Late Stone Age could probably recognize that they had arrived by looking at the inhabitants clothing and couture. Anyone approaching the Tilemsians would see their pointed teeth and know with certainty that they are in the right place. It is likely they also displayed tattoos and piercing.