The Hearst Museum curates about 8000 catalog records of archaeological objects from Africa, apart from its Ancient Egyptian collection. 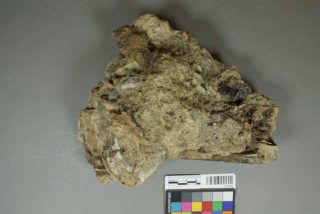 The Museum acquired its first major collection in 1949, just one year after the University of California African Expedition had returned from a two year-long research project that spanned the continent. Led by Charles Camp with the help of Frank Peabody, Edwin Loeb and other Berkeley scholars, the expedition explored and collected archaeological and paleontological objects from hundreds of sites. Plants, animals and ethnographic objects were also collected. These collections were later split among different Berkeley museums and academic departments. The Hearst received the ethnographic and the later prehistoric assemblages that totaled about 1300 catalog records. 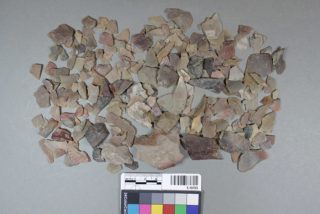 The arrival of William Bascom in 1957 and John Desmond Clark in 1961 made Berkeley one of the world premier centers for African anthropology. For more than three decades Clark and his students excavated and surveyed archaeological sites, often bring collections back to the Museum where they are still cared for today. These collections are important and diverse, from a few Neolithic flint flakes collected on a beach in Senegal to the hundreds of potsherds from Shabona (Sudan) and Acheulean handaxes from Kalambo Falls (Zambia). Additionally, J. Desmond Clark is listed as a collector for more than 70 different locations across Africa that represent the continent’s most important chronological and cultural aspects. Among the collections donated by Clark’s students include a large assemblage from Montagu Cave in South Africa, excavated by Charles Keller; Karkarinchinkat in Mali, excavated by Andrew Smith; and Katentania in Congo, excavated by Carney Schokkenbroek.